RHTC, producer and supplier of hydraulic presses, has delivered five jack test units to the Dutch Ministry of Defence. However, these test units will not be used for pressing, but to measure the pressing force of jacks that are used for maintenance, repairs and inspections of military aircraft, mainly the F16 fighter plane.

Based on the concept of a hydraulic workshop press, RHTC has developed a new installation, which can be used to test different kinds of jacks.

These tripod jack testers have now been taken into operational use at the five military airbases in the Netherlands: Eindhoven, Woensdrecht, Gilze-Rijen, Volkel and Leeuwarden. The Royal Dutch Air Force has 500 to 600 jacks at its disposal in various shapes and sizes, which are used to lift aircraft for maintenance and repair works. Every one of these jacks has to be checked once or twice a year, to ensure they remain under pressure when a load is put on them.

Previously, these tests were outsourced. This meant that the jacks were transported to a testing facility. Obviously, this was both time and money consuming. This was the main reason for the Ministry to try and find a better solution, which would then result in the ability to perform these tests on the bases themselves, rather than elsewhere. The idea was to utilise a hydraulic press for this and that’s how the Ministry found RHTC.

Loadcell with movable head in the jack test units

RHTC, together with the Ministry and Lacom (who produces the presses for RHTC), has developed a new installation based on the existing concept of the hydraulic workshop press. This machine can be used to test a variety of jacks.

This jack tester is equipped with a loadcell in the movable head. This loadcell measures the forces that are generated by the jack. The display on the side of the test unit will show the measured force in tonnes. By performing these kinds of tests, it will also be possible to check if the valves and sealings in the jack are still functioning correctly.

The movable head is easy to adjust vertically by using a winch. Furthermore, the loadcell can also be moved sideways. Due to this design, it is possible to test various types and sizes of jacks.

The total weight of the tripod jack tester is 2.200 kilograms. This is partially due to the large base plate, which in itself already weighs 1.000 kilograms. The plate has to be this big to avoid bending or deformation that might result from the heavy forces of the jack being transferred onto it. The Ministry is not limited to using the test units at their home bases, they can be taken to missions abroad, to test and check the functionality of the jacks on site as well. 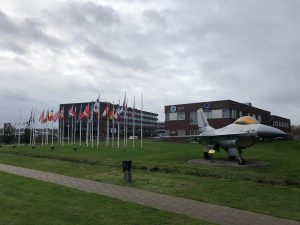 Tim Huberts from RHTC speaks about a very interesting project, that also offers new opportunities for this Dutch specialist in hydraulic presses. “It has been an intense, but also educational journey. Back in the summer of 2019, the Royal Dutch Air Force approached us to design this jack test unit. After several meetings and technical reviews, we agreed on a final design that suits them perfectly.”

RHTC was one of the five parties that was approached by the Dutch Ministry of Defence, RHTC being the only non-foreign one. Before the Ministry chose RHTC, the company had to go through several checks to fulfil all the requirements set out by the Ministry.

As a positive result of this, the tripod jack tester is now registered in the NATO database and RHTC has received an NCAGE number. Thanks to these registration numbers, it will be easier for other Defence departments to find RHTC, but also other NATO members can now easily approach RHTC for their press or test unit requirements. This offers a lot of perspective, also in other countries. “These jack test units are suitable for many different industries”, says Tim Huberts. “They are now used for aircraft maintenance, but the units can be used in every industry where there is a need to test and check pressing forces.”