Profi Press Hydraulic Presses are being sold all over the world

RHTC, the manufacturer and supplier of hydraulic presses, adds new countries to its network every year. Thanks to the high-quality press and the well-known brand Profi Press, companies all over the world find RHTC.

From the beginning, RHTC supplies its Profi Press hydraulic presses in various countries around the world. Since 2003, the workshop presses that are exclusively made in the Netherlands have been delivered worldwide. To 71 countries already. New countries are added to this network every year, because the Profi Press brand is well-known worldwide. So, both machine dealers and end users know where to find RHTC for the purchase of a hydraulic press. Not only the workshop presses are popular, the portal presses, C-frame presses, straightening presses and production presses are also popular models.

At the end of 2020, RHTC received an application for a hydraulic press from the Liebherr Group in Panamá. After exchanging information and studying the requirements, a portal press proved to be the best choice for Liebherr’s work. So this is how it happened: RHTC produced a portal press with 160 tons press capacity, a manually movable portal and cylinder and a 1500 mm working width (PPTL-160 D=1500). This hydraulic press is now ready to cross the Atlantic Ocean to Liebherr Panamá.

In addition to Panamá, RHTC can also add Japan to the list where Profi Press hydraulic presses are used. Although Japan itself is a large production country, the delivery time for a relatively simple workshop press is on average six months to a year. The application was processed via the RHTC website using a translation machine. When it became clear that one of the workshop presses was suitable for the customer, a consultant was called in to supervise the entire purchase- and import process.

The workshop press ordered was delivered in Tokyo within 3 months (after adjusting of the hydraulic group/motor). RHTC is still in contact with the consultant company to supply more workshop presses in Japan in the future.

In order to be able to meet more and more companies regarding their press demands, RHTC expands the product range every year. For example, since the beginning of 2021, a whole line of eccentric presses/mechanical presses has been added to the press range. These presses are produced in Europe and available with capacities of 30 tons up to 600 tons. Partly due to the high speeds, these machines are extremely suitable for a wide range of sheet metal processing.

The RHTC ‘specials’ program is also increasing. All kinds of companies worldwide know how to find RHTC for the design and production of a custom-made press. From Thailand to the United States, but especially many German, English and Dutch companies regularly contact us for the purchase of a press that is produced entirely according to their wishes. For example, the custom-made jack test units supplied by RHTC to the Dutch Ministry of Defense. These jack testers can now also be ordered easily by other government agencies in all NATO countries. This is because RHTC is in possession of an NCAGE number.

In addition, RHTC also delivered a special 500 ton production press to Mouw Hoedliggers in Ede last month. Mouw, a specialist in making Top Hat Q beams, is waiting until its entire production line is ready, after which this large Profi Press will be installed. More information about this will follow later in MetaalNieuws. 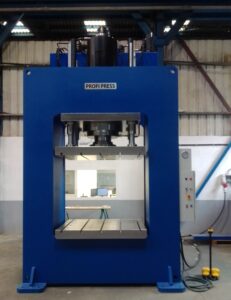